The Simplest System Thinking Practice That Can Rock Your World

Managers are not confronted with problems that are independent
of each other, but with dynamic situations that consist of complex
systems of changing problems that interact with each other. I call
such situations messes. . . . Managers do not solve problems, they
manage messes. — Russel Ackoff

Variables are the nouns of System Thinking language. They are the key forces in a systems story that 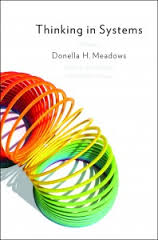 Imagine that your company is struggling with a year of low profit. The morale of your company starts suffering as a result of this. PROFITS —> MORALE; that is, in this case low profits contribute to low morale.

THINK ABOUT THIS: If low profits cause low morale, is it possible that low morale also causes low profits? You’ll be thinking not in terms of a static world, but a dynamic one. You’ll stop looking for who’s to blame; instead you’ll start asking, “What’s the system?” The concept of feedback opens up the idea that a system can cause its own behavior.

What can you learn from reversing this equation? For example what if you were to think that the subordinate influences the boss?   You would likely stop focusing on surveys and collecting data about employees’ engagement and start focusing  on how to build the relationship that produces the work.

What is the effect of this inversion through systems thinking in the other areas of our life? Consider:

What is the “opening”, the great possibility that this inversion generates? How could you use this possibility to dramatically increase your understanding of your work life and your organization?